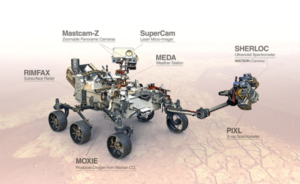 Last month, NASA once again made spacefaring history by successfully landing the Perseverance rover on the Martian surface. The size of a small car, Perseverance is the result of decades of innovative technologies and scientific breakthroughs. It’ s an incredible feat that should give everyone on Earth a sense of shared pride in our ability to overcome challenges in pursuit of human exploration.

However, if the fantastic achievements of NASA somehow don’ t interest you, perhaps the role of aerospace tech in everyday life will do the trick. Commonly referred to as spinoff technologies, innovations originally meant to aid in aviation and space exploration have been repurposed by the private sector to produce an array of popular consumer products.

The following are five examples of aerospace technology found in everyday products:

Ceramic Matrix Composite
The development of jet engine technology required scientists and engineers to devise durable components that could withstand extreme temperatures. The result was ceramic matric composites becoming the go-to for jet engine construction. Fast forward several decades later, and ceramic matrix composite is used in modern disc brake technology. Compared to traditional disc brakes made from cast iron, those made from ceramic composite can go thousands upon thousands of miles without replacement.

Blow Rubber Molding
Whenever you’ re walking around in sneakers, you’ re utilizing technology originally meant for astronauts. That’ s because modern athletic footwear is made using the same process devised to manufacture spacesuits. The process involves blow rubber molding, which means injecting hot plastic into a mold along with compressed air. Once the air nozzle is removed, a seal is made, and the result is a sealed air pocket made of rubber.

Computer-Controlled Power Supply
While handheld vacuum cleaners don’ t seem much different from traditional plug-in models, there’ s a reason they were considered revolutionary technology when first released in the 1980s. For battery-powered vacuums to provide adequate suction, they need computer-controlled power management. Such technology was initially devised by Black & Decker not for consumers to clean their homes and cars but for NASA to successfully drill on the moon and other non-Earth environments.

Complementary Metal Oxide Semiconductor
Everyone’ s a photographer these days, thanks to the high-quality image capture capabilities of smartphone cameras and other modern-day video monitoring tech. However, few of us stop and wonder how they managed to fit such impressive technology into such a tiny space. It’ s an engineering feat that’ s traced to NASA’ s development of complementary metal oxide semiconductors (CMOS). It’ s a breakthrough that allowed for smaller cameras to be used in space without compromising image quality.

Viscoelastic Polyurethane
Memory foam mattresses are another example of popular consumer products made with space travel tech. Officially known as viscoelastic polyurethane, memory foam was invented to cushion astronauts from the intense g-forces of liftoff and reentry.

Microalgae Nutritional Enrichment
What sounds like some sort of sci-fi food is, in fact, something most parents are familiar with: baby formula. NASA developed algae-based nutritional enrichment as a way to stretch food supplies in space. The substance was soon discovered to provide adequate nutrition for infants, leading to the widespread popularity of baby formula as a safe and effective alternative to breastfeeding.

The list goes on and on. These are just a handful of the most popular aerospace technologies commonly found in everyday life. So the next time you use a smartphone, drive a car, put on your shoes, go to sleep, or feed your baby, just remember you’ re benefiting from technology devised to explore the stars.