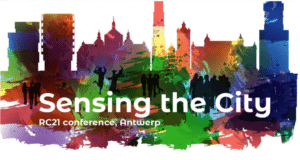 The 2021 annual conference of the International Sociological Association Research Committee 21 on Urban and Regional Development will take place this week, from Wednesday 14th of July until Friday 16th of July 2021 on a virtual form. The theme of the 2021 conference is “Sensing and Shaping the City”.

The RC21 conference 2021 is hosted by the Antwerp Urban Studies Institute, organised by the local organising team at the University of Antwerp and supported by its scientific committee.

The conference will include Paper Presentations on:

Plenaries and Semi-Plenaries of the conference:

Theme of the Conference

‘‹The general theme of the conference is “Sensing and Shaping the City”, focusing on how citizens experience the fragmentary, unequal and contradictory realities of global urbanity.

According to the organisers, although sensing the city is an everyday urban engagement of citizens, the air we breathe, the sounds we hear or the views we enjoy are shaped by political and economic power. A first theme of this conference is how urban inequalities are affected by and result in unequal access to varieties of sensory experiences.

A second theme of the conference focuses on the policing of urban populations through governing with sensory interventions as well as on the ways in which urbanites create an infrastructure of people invisible to and beyond the control of powerful institutions.

Third, the conference includes papers that focus on the ways in which large-scale organisations shape urban spaces as sensory experiences of visuals, sounds, smells and tastes in modalities that bring matters of place, people and power in dialogue with each other. Such cases are the commercialisation of food festivals, religious rituals or large events.

As a fourth theme, scholars reflect not only on the gaze of control and surveillance of smart city and big data, but also on the ways in which these digital technologies are being or could be used to enhance citizen’ s symbolic and political ownership of their urban environments.

As a fifth and final conference theme, contributions will be presented addressing the creative blend of established and emerging techniques and technologies for methods to research in urban settings, including visual, artistic and auditory methods.

About the Research Committee 21

The Research Committee 21 (RC21) on Sociology of Urban and Regional Development of the International Sociological Association was established in 1970 to promote theory and research in the sociology of urban and regional development. According to the committee, at a time when cities, towns, and regions, and the world more broadly, are undergoing profound change, these international links are of critical importance for promoting and advancing scholarship.

You can find more information regarding the conference and the full program here.