The origin of the present work goes back to 2015 and the first attempt to define the smart city ontology (SCO 1.0) (Komninos et al., 2015). In the framework of that work, the aim was to assess smart city applications and e-services. The underlying hypothesis connected the effectiveness of software applications and e-services to their ontology, and in particular their position in the overall smart city ontology. Thus, the aim of SCO 1.0 was to define how wide and effective was the ontology of a smart city application. Another version (SCO 1.1) was developed in 2018 with minor changes in classes, but it was not released and remained for internal use in our lab.

Since these first attempts for an SCO, many things have changed in the domain of smart cities, both in theory and practice. We may say that currently, we have a better understanding of the smart city landscape, the family of terms proposed and used, their meaning, and their relationships. Also, the work on platforms and frameworks for the development of ontologies has progressed and we now dispose of more elaborated high-level ontologies for the design of domain-specific ontologies, such as BFO, DOLCE, and others.

The present work and development of SCO continue the efforts that started in 2015, integrating and re-using many of the initial entities (classes, object properties, data properties) but also have some important differences. The most important differences are about (a) the aim of the SCO development and (b) the use of the Basic Formal Ontology (BFO) as a high-level ontology to develop a domain-specific ontology for the smart city. The motivation for continuing this work has been the interest of the smart city community for an ontology of the smart city, the many demands that we have received for providing the owl file of the SCO 1.0 to be used in various other experiments and assessments, as well as the few works that can be found in the literature on this subject, besides the plethora of publications on smart cities. 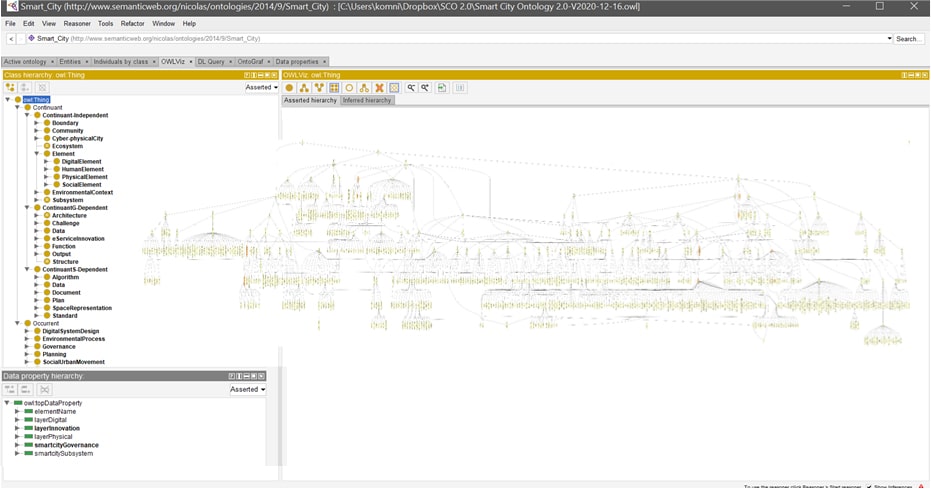 The aim of the SCO 2.0 is to provide a better understanding and description of the smart/intelligent city landscape; identify the main components and processes, the terms used to describe them, their definition and meaning; clarify key processes related to the integration of the different dimensions of the smart city, mainly the physical, social, and digital dimensions. Also, we have two specific goals. First to help researchers and smart city developers identify areas in which smart technologies and solutions may improve the digital infrastructures and e-services that cities provide. Smart cities evolve by integrating digital and non-digital city elements. Identifying virgin areas of digital transformation may help to develop new smart city solutions for the optimization of assets and the design of innovative e-services. Second to provide a framework for more extensive work on the smart city ontology, leading to a full SCO from the community of researchers working in this field.

The smart city is becoming the standard model for the design and development of 21st-century cities, and the SCO is a fundamental pillar for the informed use and further development of this model, which is shaped by interdisciplinary efforts from the engineering, social sciences, and information technology. An important contribution of the SCO is to reveal linkages between the digital and non-digital dimensions of the city and improve both: the physical and social space of the city through the deployment of digital services, data, and Internet infrastructure; the digital solutions by considering the dynamics of the physical and social space of the city and revealing fields for further deployment.

Smart City Ontology (SCO 2.0) continues the efforts that started in 2015, integrates and re-uses many entities (classes, object properties, data properties) of the initial version, but also has some important differences. The motivation for continuing the work on the smart city ontology has been the interest of the smart city community for an ontology of the smart city, and the many demands that we have received for providing the owl file of the SCO 1.0 to be used in other experiments related to smart cities.

The most important differences between SCO 2.0 compared to the initial version include (a) the use of the Basic Formal Ontology (BFO) as a high-level ontology to guide the creation of a domain-specific ontology for the smart city, and (b) the aim of the ontology to provide a better understanding of the smart/intelligent city landscape; identify main components and terms used to describe them, their relationships; and key processes related to the integration of the different dimensions of the smart city, mainly the physical, social, and digital dimensions.

SCO 2.0 contains 918 classes, 66 object properties, 197 data properties, and 27 individuals. Compared to SCO 1.0, the main changes are in the number of entities, the layers of hierarchy, and the 1st-level universals (concepts) that define its structure and relationships.